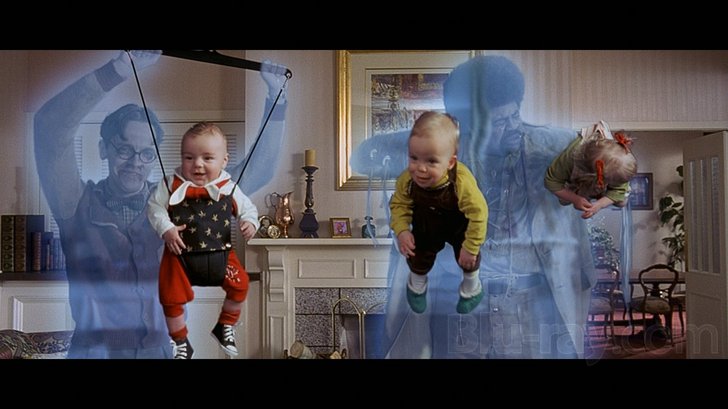 This past Friday evening was movie night at my friend Mel’s and since Halloween is just around the corner (okay, like 2 months away), we decided to watch a Halloweeny movie. I think it was Rhiannon that chose The Frighteners and I’m pretty appalled with myself to say that I didn’t know what it was. Apparently it was directed by Peter Jackson – like, THE Peter Jackson (Lord of the Rings, The Hobbit, The Lovely Bones) and starring Michael J. Fox, I feel now like it should be a classic. Reading up on it, I learned that it was (a) a box office flop and (b) received decently on Rotten Tomatoes at 64%.

Watching it, I got definite Beetlejuice and Poltergeist vibes and it was great. I also have to say it started off as one film, took a hard left and turned into an entirely different film altogether. By the end, I was mostly just sitting there saying, “What. The. Fuck!” – in a good way, I assure you!

It’s about an architect named Frank Bannister (played by Michael J. Fox) who semi-sort-of cons people into thinking that he is cleansing their houses of spirits. Semi-sort-of because he does have the ability to see and speak to ghosts, but each haunting is a clever ruse put on by him and his ghost buddies, Cyrus (played by Chi McBride), Stuart (Jim Fyfe), and Judge (John Astin). He charges people money to cleanse their houses and is basically a con artist.

Pretty soon he finds himself at the centre of a bizarre pandemic: People begin dropping like flies, usually after contact with him. He discovers there is a creepy entity, strongly resembling the Grim Reaper, killing people and marking their number in their forehead (but only Frank can see these numbers!)

I don’t want to spoil it because I didn’t see it coming, but it spirals into the most off-the-wall, messed up thing involving a myriad of… interesting characters, including an FBI agent named Milton Dammers who was apparently a victim of the Manson Family in ’69 (played by Jeffrey Combs – Re-Animator).

It was just the strangest, most wonderful thing I’ve ever watched. I thoroughly enjoyed the weirdness and the absolute what-the-fuckery and it was more than just a film – it was an experience. I almost want to add it to my October movie line-up now – I will definitely watch this again in the future. Definitely.