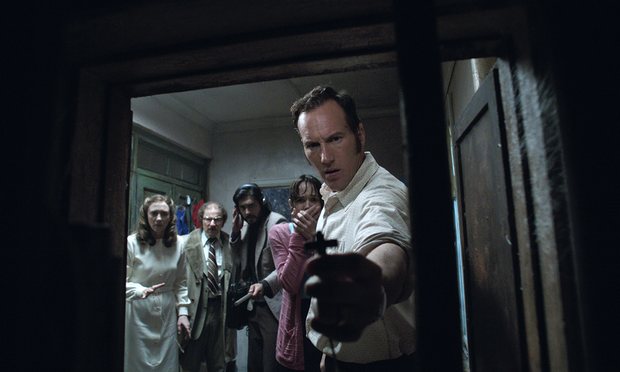 James Wan is becoming one of my favourite directors. First, we had Saw, which you can’t argue became one of the most overdone franchises in horror history, but still grossed $873 million at the box office worldwide. Then he did Dead Silence and that was like, okay we’ll just pretend you didn’t do that. Then came Insidious, which, while not one of my favourites, was a satisfying horror. In 2013, 3 years after Insidious, he hit the motherlode with The Conjuring. With 86% on Rotten Tomatoes, it quickly became one of my favourites (ever) to watch. There’s just something about Vera Farmiga and Patrick Wilson’s sincere performances and a family with like, a thousand daughters, being tormented by a spirit from the Great Beyond that makes a horror fans’ every hair stand on end… with glee.

Since then, he’s had Insidious: Chapter 2 which I haven’t yet ventured to see, Furious 7, and most recently, The Conjuring 2. So of course, as soon as I heard it was out, I was so excited to see it. I waited (tensely, excitedly… breathlessly) until my favourite movie-watching friends (HI ANH, MEL, JULIE & RHIANNON, MISSING BRANDI & SPECIAL FEATURING KATIE & GREG) were ready and hurriedly rushed over with anticipation.

What I expected was a Conjuring 1-like retelling of the Enfield haunting. What I got was something very much like the first film, but also, so much different. The vibe was just a little different, I think because it’d been done before, it followed the same formula (children experience strange occurrences, parent(s) don’t believe them, something happens and the parent(s) witness it…) but then the formula changed. First of all, all of those usual things happen so fast – we were into the action in like, half an hour, it felt like. Then after those things happened, the family did a thing… a thing I’ve been waiting for a family to do – they fled the house. I mean, they went back near immediately, but still they tried to flee the house for a split second before “coming to their senses” and returning to Hell. I’d be lying if I said that The Conjuring had the same effect – it definitely has lost some of it’s ‘wow’ factor and I think a big part of that is due to the fact that you actually see the ghost’s face so often. It just becomes a little overdone. There’s no mystery. Whereas in the first one, the ghost’s identity is kept a secret until you absolutely MUST know it, in this one, you semi-sort-of know pretty quick off the bat.

For that reason, I didn’t enjoy this movie as much as the first. I still enjoyed it, don’t get me wrong, but I didn’t find myself saying, “WOW, what a good horror movie” at the end. My other big criticism is that it felt long – especially during a number of sappy, out of place scenes that I guess were supposed to be… romantic(?) between Ed and Lorraine Warren. I’m sorry, but this is a horror film… horror and romance are two genres that just don’t jive well together at all. I personally could not care less about their weird, ghost-hunting relationship and I super don’t want to imagine what they’re doing after the ghost-hunting is over when they’re not in separate beds any longer. Ew.

While it’s true, there were more jump scares and tense moments than the first, I don’t think they were used as effectively. Maybe for those who are extreeeemely easily scared (Julie), they are, but there are so many and they are so constant throughout the whole film that it gets exhausting after a while.

All-in-all, it was an enjoyable movie and you could tell that Wan put a lot of thought and effort into an elaborate plot that keeps you thinking and guessing from start to finish (well, up until a long scene of Ed and Lorraine embracing to Elvis??? anyway) Had they kept the ghost’s visage a bit more under wraps, I think it would have been that much scarier and that much more successful than the first. I can’t get over that, because seeing a ghost TOO often kills the mood – kills the mystery – kills the scare-factor.