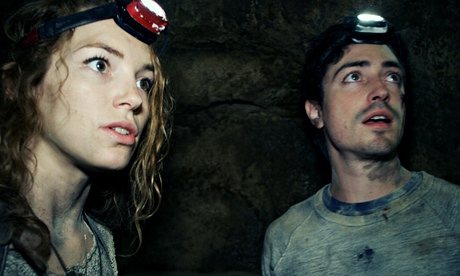 I took a while to work up the courage to watch this one. I have a bad habit of looking up the reviews for films before I watch them and sometimes basing whether I watch them or not ON those reviews. This one currently has 25% on RottenTomatoes, but the premise seemed super-interesting to me, so David and I took a risk… took the plunge… and we did it! We watched it! And we survived!

Honestly, 25% to me is heinously low. We started it when I was supposed to leave at 11:30. 11:30 rolled around and there was still 30 minutes left and I couldn’t drag myself away! I was totally sucked in. Absorbed, even.

I mean, the story is a little bit lackluster, sure. But what story do you really need when your setting is the catacombs beneath Paris? Does anyone really care what the set up is for the film? It’s pretty dumb and it leaves a lot to be desired, but anyway, our main character Scarlett (2 PhDs and a Master’s and also looks like she’s like, 28) wants to enter the Paris catacombs to find the Philosopher’s Stone. She drags along her cameraman, Benji and her friend, George, and they find some locals who know their way around the catacombs like the backs of their hands. I definitely felt like I was watching a spin-off of The DaVinci Code combined with the claustrophobic setting of The Descent. I’m a super claustrophobic person and yet, I really didn’t find the claustrophobia scenes all that disturbing.

What I found really effective was the isolation. They basically go through a small hole to get to this area of the catacombs that tourists don’t normally get to see, their entryway collapses, and they’re pretty much trapped. That horrifies me.

The film is fueled by stupid characters who blatantly disregard warning after warning, dying off one by one, but rest assured, this is no pessimistic ending. It really takes advantage of the setting it has to work with and the villains are mostly hidden, which is a breath of fresh air for the found footage genre, I feel.

I really liked it and would have given it at least a 70%. I will likely buy this one to watch next Nanasween!