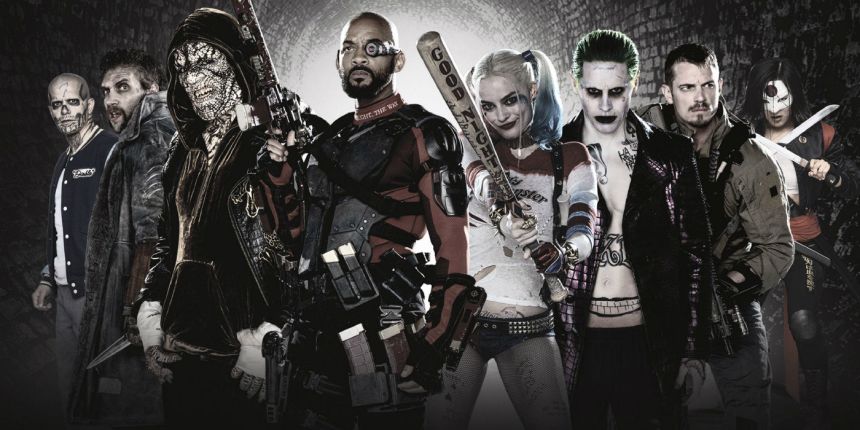 I wouldn’t say I’m a mega-fan of superheroes or supervillains (except maybe for Deadpool because come on… it’s Deadpool!), but I’ve seen quite a few superhero films in my day. Honestly, I wasn’t expecting a whole lot out of Suicide Squad from the get-go. It’s sitting at 25% on Rotten Tomatoes and a slightly more encouraging 6.3 on IMDb (although, I put almost zero stock into IMDb these days because it just never aligns with my personal ratings) and with, like, 13 “main” characters, I was expecting a busy, cluttered, overstimulating mess. Unfortunately, that is exactly what I got.

The things I did enjoy were few and far between. I really liked the casting choice of Will Smith as Deadshot, but that could just be because it’s Will Smith and the man can act. I also enjoyed Margot Robbie as Harley Quinn. She just… fit. She was the perfect balance of psychotic and funny. Jared Leto as The Joker, however, was the opposite. Too much crazy, not enough jokes. I was pretty on the fence about Jay Hernandez as El Diablo… I liked his casting, but I don’t think he got enough character development. It’s not surprising though, because how are you supposed to cram THAT MUCH character development, plus a story, into 2 hours of film?

I really feel like that was the movie’s biggest flaw. They crammed TOO MANY characters into it. They could have easily done away with Slipknot (who had like, what, 10 seconds of screen time before getting downed?), Killer Croc (which is a damn shame because Croc is one of the best and most frightening Batman villains, in my opinion), Katana, and probably even Captain Boomerang, and been perfectly fine. It would barely have changed the storyline at all. When you think about it, they made a movie for a good number of the Avengers before putting them together into one collective film – Iron Man got numerous films, Captain America, The Hulk, Thor/Loki. Maybe they didn’t all get independent films first, but they introduced big players beforehand. If they had started out by making a Harley/Joker film, a Deadshot film, a Killer Croc film… anything… it would have given them fewer introductions to make to an audience that you have to assume knows little to nothing about each villain’s backstory. But instead, they took this route, and tried to do it all in one. It didn’t work out well for them.

At first, I was impressed with Cara Delevingne, who played June Moone/Enchantress, but after a while, the weird swaying thing she did with her body and the crying (which is apparently the only thing that June actually does as a person) just got old. She wasn’t a particularly well-developed villainess. Okay, she’s evil, okay, she’s mad, okay, she really likes her brother. Not entirely sure what the motivator behind her ending the world is, especially since she keeps talking about “ruling the Earth” – okay, cool lady, but you want to destroy the Earth to ensure that you’ll have… nothing to rule? I don’t know. Seems like absolutely no thought went into Enchantress’ actual reasons for being and reasons for being the way she is.

For that matter, why is Amanda Waller even putting together this “Task Force X”? She literally made this task force for some reason, then one of her subjects turned on her and she’s using the remainder of the task force to fight the rogue member of her task force. What?! If you needed a special task force to fight something, would you reaaaallly choose Harley Quinn anyway? She has no real “powers” per se, she just uses a bat to hit people with. Also, she’s crazy and pretty unpredictable. I think if I were preparing a task force, I’d pick reliable and relatively mentally stable people like maybe soldiers or something. I can KIND OF see why you’d pick Deadshot – man who can shoot guns really well… might come in handy. And Killer Croc is pretty bad-ass. But El Diablo? He’s literally sworn not to use his powers anymore. Katana? No real powers except, ooooh, her sword steals souls. How is that going to help, though?? And dear GOD, where was Batman? Where was Superman? Where was The Flash, who was literally in the film for a split second (I see you, Ezra Miller!)???

At all times during the movie, I felt like there was just too much going on. It was messy, it was noisy, it was cacophonous. I didn’t enjoy it. I mean, I’m not going to sit here and say it ranks down with Green Lantern or anything, but it was bad. It was not a good film. That I can say with confidence. What a letdown.