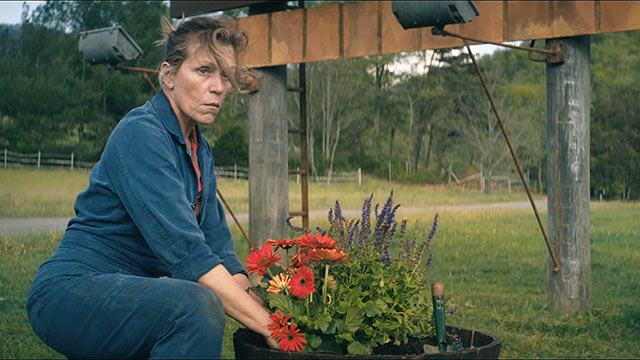 I’m not holding back on spoilers in this particular review because I feel the need to point out some gaping plot holes and… well, I just need to demonstrate how erratic the tonal shifts were. So, my apologies.

This year, I am waaay behind in watching the current Oscar Best Picture nominations. To be fair, I wanted so badly to see Lady Bird in theatres and it was here for like, a week, so I didn’t get to. I’m sure this one will be the same way – in & out before you can even utter its title. Three Billboards outside Ebbing, Missouri: a tale of persistence that is simply unable to get it’s bearings on what tone it wants to convey. For the first probably 45 minutes of the movie, I was pretty much hooked. It sucked me in so fast, it kind of felt like I had come in in the middle of a film but I already knew what I needed to know. It was almost nice. But after a while, the tone started to take wild and erratic turns that were just… weird. At one point, we are aware that Woody Harrelson’s character is dying of pancreatic cancer (you know, the one with the famously low survival rate, so we definitely know what’s coming), but everything is going okay, Woody Harrelson and his weird (super out of place) wife are making jokes about their day and about Woody’s… er… noodly appendage. Next thing you know, his wife is making him go out to the stables and shovel horse shit even though he’s DYING?! What a lazy, ungrateful woman. Anyway, next thing you know, he’s committed suicide, but don’t worry, it then jumps back to comedic relief in the form of a letter written to his wife. It’s just… hard to follow, jarring, and it feels like someone totally shit the bed in the editing room. It’s like a very emotional rollercoaster, but it’s not fun.

There were a TON of plotholes that just kept jumping out at myself and my boyfriend on our ride home from the theatre. Characters completely do 180s on who they are as a person – Officer Dixon, a racist, asshole cop, suddenly shifts to being some kind of hailed hero after reading a letter from the now-deceased Woody Harrelson? I can see wanting to mend fences after being a total douche for the first half of the movie, but this was just like, he was a totally different character. He overhears a man in a bar talking about something he did to a girl and it’s pretty much word-for-word what happened to Angela Hayes in the film. He concocts this elaborate plan to get his DNA to test at the police station, getting himself pretty much beat to a pulp (instead of just, I don’t know, taking his beer bottle or something, but okay)… and then it turns out the DNA doesn’t match. I’m sorry, but that’s too much of a coincidence. That is WAY beyond suspension of disbelief. Why is this man hanging around Ebbing, Missouri so often? Why did he corner our main character in her workplace and hint that he was the man who did it? Why are the details of the occurrence literally the same? I’m sorry, that’s just not working for me. They could have written it in a much more subtle way that still made the audience suspect it was him, but didn’t have to feed it to us.

Why did Willoughby (Harrelson) wait until after he was dead to write Dixon a letter telling him how to be a better police officer? Why didn’t he just tell him that in person when he was alive? Why did the new police chief that witnessed Dixon throw someone out a second story window and then continue to beat on him for no particular reason say nothing about it? Dixon does end up getting fired, but not until he mouths off to the new chief. I.e., it has NOTHING to do with the fact that he beat an innocence man so badly it got him admitted to the hospital. Nope, no repercussions there. Okay.

Everyone seems to be pretty aware that it was Mildred (our main character) that set fire to the police station… but no repercussions there because Peter Dinklage is there to save the day with an alibi………………. ooookay.

Woody Harrelson’s wife is a supermodel with a weird British/Australian accent? She is beyond out of place in Missouri and again, it’s just not believable. Not to mention, she was an awwwwful actress.

McDormand was a fantastic actress and Harrelson was wonderful too. Actually, even Rockwell was really good. I think the flaws in this one come down to writing and plot – the more I think about it, the more questions I have and they’re not the good kind of “keeps you thinking” questions, they’re the kind that make you go, maybe this just wasn’t that good of a movie. I don’t know. I don’t see why this one is up for Best Picture and honestly I kind of wish I had spent my time watching The Shape of Water instead. Hoping I make it to that one before it’s out of theatres.

To be honest, if you skip this one, I don’t think you’re missing much.